CLICK HERE to join REFIT's LIGHT IT UP! 21-Day Challenge Join the Light It Up! Challenge 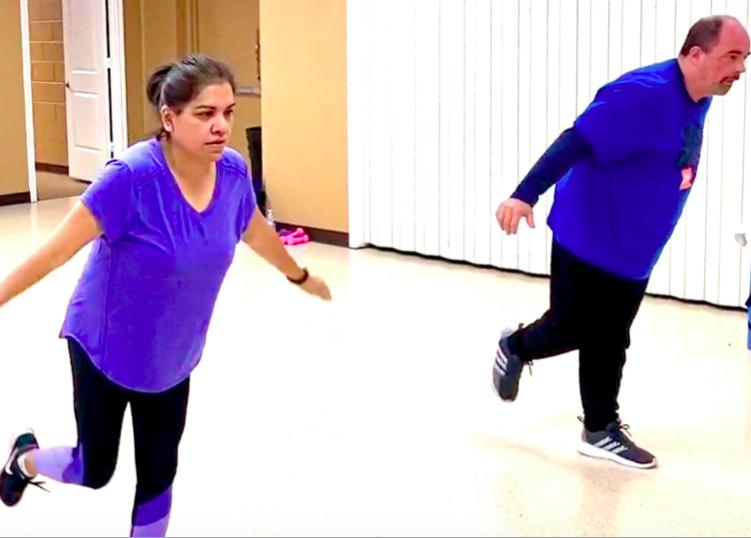 A REFIT and REV+FLOW TESTIMONY

We all know the benefits of exercise, but some of us know this in a personal, life-changing way.   Read more about Gina and Doug’s health journey and how REFIT® and REV+FLOW saved their lives...literally.

Gina and Doug Simmons have been married since 2005. Before they got married Doug was a professional wrestler and was thrown out of the ring on the left side which broke his hip. He had his 1stcomplete hip replacement in 2004. A year after they were married, they decided to start a family, but it didn’t happen for them. They went to 3 different infertility doctors and Gina had 4 IVF treatments, they ended up having 4 miscarriages. After the last miscarriage Gina went into a deep depression, and Doug suggested they go on a Caribbean vacation to get their minds off of things. Right before the trip, she wasn’t feeling well and went to the doctor. It was at that time he surprisingly told Gina she was pregnant…at 43! Their daughter Maddie was born on March 13, 2016, she is now 6 years old.

In December 2017, Gina began having chest pains and feeling like she was having a heart attack. She was rushed to the ER, where they diagnosed her with supraventricular tachycardia (SVT). She had a heart ablation to correct the problem. The Cardiologist informed her she’d need to visit annually for full testing because her EKG was still not where it should be after the procedure. The doctor wanted her to get more exercise in her daily routine.

Then in Oct 2018 Gina went in to see her OB/GYN for her annual checkup. Her doctor explained that 2 of her patients in the past month were in their late 40’s and both had died from heart attacks. She told Gina that she had to get serious about her health and find an exercise program that she could stick with because she didn’t want to see her daughter without a mother. That conversation really hit hard for Gina! She remembered being told by her daughter’s teacher a year earlier about local REFIT classes, so she found the class and joined. Gina has been faithful in attending REFIT and REV+FLOW ever since.

At her most recent visit in January, the cardiologist sat her down and asked what she had been doing the last year regarding exercise. He was amazed at her progress in the last year and said her heart is in the best condition he’s ever seen. While comparing the test results year over year, the doctor said to her “look at your latest test, now THAT is a healthy heart!” He immediately went online to look up REFIT® telling her that he wants to recommend REFIT® and REV+FLOW to all of his patients!

Doug has had 4 hip replacements on his left hip, 2 knee surgeries and had to have the 2nd, 3rdand 4thvertebrae fused in his neck. He began REV+FLOW with Gina in August 2019 and was doing great, until he got an unexplained infection in his hip replacement and it turned septic. The doctor had to replace it with a new hip. After being in the hospital for over 2 weeks with heavy antibiotics to kill the infection, he was sent home with an additional 6 weeks for IV antibiotics. The doctor said he’s very lucky to be alive. He began Physical Therapy, but still didn’t feel stronger with each session. The doctor released him and allowed him to continue REV+FLOW again.  Because of REV+FLOW, Doug believes he will continue to have more mobility creating a better quality of life for himself, Gina and Maddie.

Doug and Gina say that REFIT and REV+FLOW has literally saved their lives – being good for the heart AND body!

I love the doctor is recommending REFIT to his other patients, but wish doctors would recommend REFIT to other doctors. Every time I see mine I tell him about REFIT but the next time I'm going to mention he needs to recommend this type of exercise to other doctors. Gina and Doug thank you for sharing your story.

wow! this is a powerful testimony 😊

Wow so amazing!! So happy for you both sticking to it and being such a great example and motivator for all of us ! ❤️💪